Alexander Barkoci, born in 1955, lives in Komarno, Slovakia, with his wife Zuzana (Susannah) and their six children.

He grew up in a Christian home. At the age of 15 he accepted Christ as his personal savior. He turned from his sin and committed his live to God.

In the 1970's it was not possible for Alexander to study theology in Slovakia, so he was trained in machine engineering in order to earn a living. He also trained others in this area and was the overseer of several workshops.

In 1988 he was called to the pastorate by the Baptist Churches of Slovakia. He performed this ministry for 15 years. During this time he completed studies in theology at the seminary in Budapest. God gave him the ability to serve and speak in the Hungarian language as well as in the Slovak language.

Later he accepted the call to full-time evangelism. From that time until now his ministry has consisted of proclaiming God's work and ministering to the spiritual needs of individuals throughout several countries in Europe. Many people have received spiritual help and have turned to Christ as result of this ministry.

Since 2006 Alexander Barkoci has worked with the foundation Hope without Boundaries. The purpose of this non-profit foundation is to support Christians in their faith and to encourage them to spread God´s love to those around them.

More information about the foundation and its activities can be found on www.hoffnung-ohne-grenzen.de 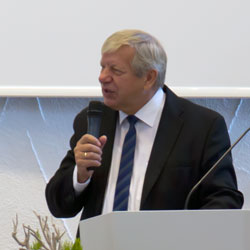